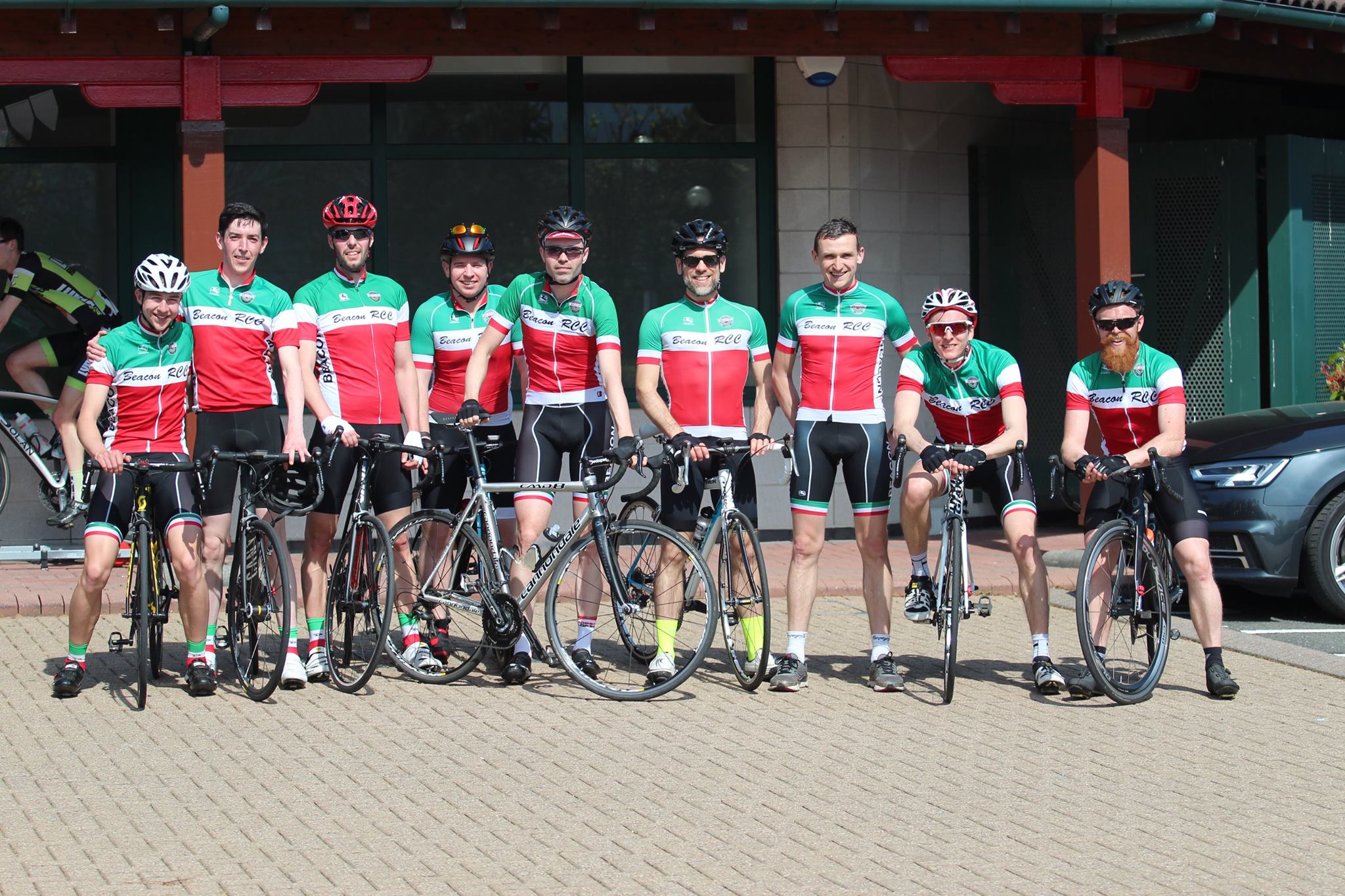 April got off to a good start for the club, with Dave Hughes winning his category at the LVRC Solihull Early Season Circuit Race at Tudor Grange. Dave mixed it up with lower age-category riders to slip away from his main competitors in a breakaway and lap the other category F riders to take the win. This was doubly impressive given that he was telling himself that he needed to save his legs for the following day’s trip to Milton Keynes for the CC Luton Claydons Spring Classic Road Race, which formed part of the Percy Stallard Series. Dave spent much of that race chasing close rival Joe Rowe, who was following category E riders as they attacked. Despite suffering on the climbs, Dave stayed with the bunch into the finale and ended up following E rider John French as he attempted to win from distance. Clear of the bunch with 200 metres to go, Dave suffered cramp and couldn’t quite hold his lead until the line, finishing 6th in category F. It’s a mark of how well Dave is going though that he counts 6th as a bad result!

Matt is being supported by the Beacon’s inaugural under-23 racing bursary this season. On the basis of his application and the promise that he had shown in the last couple of seasons, the committee was of the view that Matt would make an excellent first recipient of the funding, which is intended to reduce the cost for racing for young Beacon members, and this result demonstrates why.Not wanting to be outdone by Dave, there was an unprecedented (at least in recent times) turnout of somewhat younger Beacon riders for the Karbona Circuit Races at Birmingham Business Park on 9 April. Matt Clegg and Tim Egan raced in the 3rd-cat event, before being joined by Laurence Cooley, Roger Cutler, Ryan Evanson, James Graemer, Mark Hobson, Robin Kirkham, Daniel Newns and Gavin Passmore in the 3/4 race, making for a Beacon team of ten (10!). The day got off to the best possible start when Matt landed his first win in the early morning 3rd-cat race. He followed another rider off of the front of the bunch, only for that rider to drop back, but was soon joined by a new breakaway companion in the form of Shutt Velo Rapide’s Billy Leason. The pair stayed away to the line, maintaining an impressive gap on the bunch, and Matt outsprinted Leason for the win.

Matt followed up his win by riding for his teammates in the 3/4 race, which after an hour’s racing and many thwarted attempts at breakaways, came down to a nervy bunch sprint. Roger, Gavin and Laurence were the highest-placed Beacon finishers, with Roger grabbing some points for 6th. Full results for both races are available here, and there’s a good write-up including photos on the British Cycling West Midlands Facebook page. The same day, John Hunt was racing in Beacon colours in the Two Counties Road Race on the hilly Bridgnorth course. By all accounts, John was going well until a puncture towards the end of the second lap ended his race.

Rounding off April’s report, Dave Hughes returned from some training in the Mallorcan sunshine to race the LVRC Derby track league on 20 April, where he won both scratch races in bunch finishes and the points race, before crashing in the elimination. He now leads his category in the league table. Dusting himself down after his crash, Dave then travelled to Halifax for the Derek Smith Memorial Road Race on 22 April, taking the overall and category wins in the F/G race. On 29 April, he finished 2nd in his category in a Tunstall Wheelers/Brian Rourke-Pro-Vision circuit race at Darley Moor, to finish off another excellent month of racing for the veteran sprinter.

Now that we’re into May, opportunities to race are coming thick and fast, with a number of Beacon riders taking part in the Halesowen Friday Night Track League, the Stourport Summer Series, the Solihull No Frills races at Tudor Grange, the SSSCCRRL and a number of Sunday road races. As always, e-mail the racing secretary at roadracing@beaconrcc.org.uk if you are interested in getting involved. It would be particularly good if we could get some female club members regularly taking part in circuit and road races, following Jessica Rhodes-Jones’s impressive time trialling lead, and to that end, there is a series of British Cycling rider development sessions specifically organised for women and girls starting on Friday 26 May at Tudor Grange. Do check it out if  you are keen!