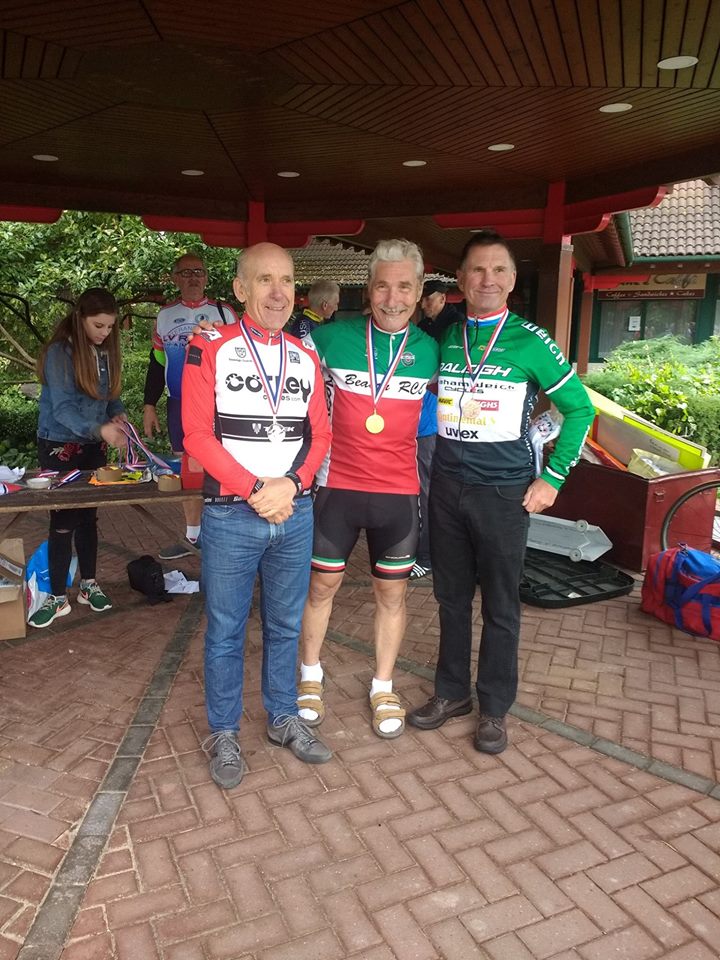 Not for the first time this season, the big news in September came from the Hugheses. Dave’s main event for the month was the F-category race at the LVRC National Criterium Championships at Birmingham Business Park on 3 September, hosted by Behind Bars Sports. Dave had targetted this event last season, when it was held at Stourport, finishing 3rd behind Don Parry and Ken Bradbury. With both those riders on the start sheet again this year, on an overcast, windy day with heavy, intermittent downpours that made for some slippery manhole covers at the Business Park, the ingredients were there for a tough race again this year. Dave played a tactical game and didn’t follow when a number of early attacks went, saving himself to bridge across (with Don Parry) to a strong four-man breakaway including Dave Woods of CC Luton, who finished 3rd in the LVRC National Road Race Championships earlier in the season, which eventually established a gap of some 2-300 metres on the bunch. Dave reports that “what followed then was as honest a race as I had ever been party to”. The six riders worked together by riding through-and-off right up until the bell that marked the final lap, increasing their advantage on the bunch. For most of the final lap, Dave sat on Woods’s wheel, with Parry following. In the finish, Parry kicked first and came around Dave, but Dave was able to close the gap and took the win, and the national title, on the line.

Later in the month, Anne Hughes, who had already won gold medals in the British and European sprint triathlon championshipsearlier in the season, took the female 60-64 sprint triathlon title at the ITU World Triathlon Grand Final in Rotterdam on 17 September. Anne beat 35 other competitors in her age category to take the gold medal, in a controversial race which initially saw another competitor awarded the win, only to be disqualified when it emerged that she had not completed the entire course. Anne completed the course in just over 1 hour 25 minutes, winning by a margin of some two and a half minutes from fellow Brit Mary Derrick to become the Beacon’s second world champion of 2017, following Jessica Rhodes-Jones’s success in the UCI Gran Fondo finals in August. Even before her world title win, Anne had been nominated and shortlisted in the Amateur Sportswoman of the Year category at the 2017 Birmingham Sports Awards, and while she was unable to attend the ceremony due to being in Rotterdam, this was recognition of the fantastic season that she has had.

While the British Cycling calendar for the West Midlands was pretty sparse come September, Gavin Passmore made the most of the fourth and final round of the Criterio du Rosa mini series at Stourport on the first Saturday of the month, taking 3rd placein the 3/4 race to add to the two 7ths he racked up in the first two rounds. Laurence Cooley, meanwhile, headed further afield in search of the three points he needs to make it to 3rd category this season, racing at Hillingdon on 16 September, where he tried a couple of attacks but was unable to get away from the bunch, before the disappointment of a cancelled race in Winchester the following day.

Gavin has meanwhile also been confirmed as finishing 2nd overall, joint 2nd in the sprinters’ league and 3rd in endurance group 2, in category B at the Halesowen Friday Night Track League. Dave Hughes’s win in the LVRC’s over-65s points series, awarded on the basis of riders’ best five results, has also been confirmed.

Meanwhile, the West Midlands Cyclo-Cross League is now well under way, with the Beacon having co-hosted the opening round in Redditch on 3 September. So far, Beacon Academy members Oliver Durose, Louie Kennedy, Ashleigh Kennedy, Henry Egan and Joseph Egan have all taken part in at least one round, as have Stuart White, Roger Culter, James Tate, Adrian Ravenscroft, Pete Marshall, Gary Mackintosh, Nic Vipond, Helen Jamieson, Charlotte Elliss, Gemma Johnson and Tessa Oelofse in the seniors or veterans categories, making for a huge Beacon cyclo-cross squad this season! There are still plenty of rounds to go, so do give one a go if you want to join the team.

There are a few other events to flag up. Entries are still open for the University of Birmingham CC Criterium at Tudor Grange on 14 October. Gavin is organising a track session at Derby on 12 November – details are on the club message board. Finally, keep your eyes open for news of a Go-Ride cyclo-cross event at Rowheath in December, which Tim Egan is organising.